With its fascinating history and special role within the county, it’s no surprise that Pontesford hill has been the subject of various news clips and short films over the years.

Here you can find links taking you to videos including a documentary film showing local school children honing their skills as natural historians, a clip from BBC radio Shropshire about the success of the locals securing the future of the hill and a few pieces of camera trap footage courtesy of the Shopshire Wildlife Trust showing the diversity of species found on and around the hill.

The Friends of Pontesford Hill have managed to hold a “virtual AGM” process and have elected two new officers.

We owe an enormous “thank you” to Christopher Cooke and Brian Simmonds, the departing Chair and Treasurer for their years of work. Hopefully one day soon we will be able to thank them in person.

In these times it is more important than ever that we keep an up-to-date distribution list of freinds, and our first task will be to try to sort this out.

Enjoy the Hill. Please be thoughtful about your dogs and their waste.

Welcome back, but please remember that dogs should be kept on a lead.

The car park is open once again and we have seen a massive increase in visitors. You will notice how much the Hill benefited from a bit of a rest.

In particular, there is no dog poo or poo bags in evidence. Please try to keep it this way:

On the car park please “bag and bin” dog poo (there is a bin by the main gate).

On the paths please ‘stick and flick’: move poo off the paths into undergrowth by flicking with a stick, a stone, or the side of your boot.

Please never put down a poo bag or hang it on a branch “to collect on the way back”. Too many people forget. Poo bags themselves are an environmental risk.

Please also remember that UK Govt Social Distancing rules advise that dogs should be kept on leads in public spaces. These rules are still in force.

Some great stuff to watch while on lock-down:

Stewart Edmunds of SWT used a camera trap to capture this amazing footage of wildlife on the Hill last year. Have a look to see some unexpected species just where you go for a walk (and you can also enjoy the beautiful views of the hill in summer: not long to wait now):

Brian Simmonds found this historic educational documentary on Facebook: Harlescott Grange Primary School children on the Hill in, I think, the early ’60s. You will recognize some of the individual trees, but the views have changed. These remarkable children will now be in their 60s or 70s. I wonder if we could identify them and invite them back to the Hill?

The trees on Pontesford Hill had been relatively neglected for decades when the Wildlife Trust took over. It will take many years to bring the woods back to optimum habitat. This is the Trust’s Management Plan:

1. What have we got? What is our vision?

Pontesford Hill is 26 hectares and is owned Freehold by SWT.

Pontesford Hill is primarily a wooded hillside with a number of other features within this wooded structure. There are two Scheduled Ancient Monuments (SAMs) within the site, Lower Camp hillfort and The Cross Dyke at the top of the hill. The rest of the site has no designations other than woodland that may require licences from FC for any felling works. Access is restricted, a bridleway and ‘bulldozer track’ circle the bottom of the hill but the bridleway is narrow and very muddy during the winter. Woodland on the site varies from pure conifer to predominantly mixed broadleaf.

In the long term the site will have an area of acid grassland on the summit with views across Shropshire. The hill will have a fringe of broadleaf, native woodland managed as coppice with standards and/or continuous cover woodland providing a source of timber and a valuable habitat for wildlife particularly dormice already present on nearby Earl’s Hill. The SAMs will be covered with a grassy sward easily visible and interpreted by the visiting public.

History and cultural features – For more information see the article written for the SCT in 1974 – The woodland on the east side of the Hill is very different in nature to other wooded areas as it was planted in the mid 1800s and may have been planted as much as a landscape feature as a resource for timber. It should be noted that the East and west of the Hill were in two different parishes and underwent very different development following inclosure in the early 1800s. The west side of the Hill was still grazing land until mid 1900s. After this date conifer plantations were planted and the abandonment of grazing allowed other nearby trees and woodland to spread.

The sheep on the hill are “Hill Radnors”. They have furry light-brown faces like teddy bears. They are at work grazing down brambles and scrub. Please look after them by keeping your dog on a lead.

The cows on the meadows at the back of the hill are a mix of shaggy Highlands and black Dexters. Despite their fierce-looking horns, these are small, docile cattle. Please look after them by keeping your dog on a lead.

What to look out for in Spring on the Hill

The snowdrops are over, and what a wonderful display they have been. So what should we expect to see next? Well, the bluebells are coming through and will soon be flowering. Their pointed leaves push through the leaf litter on the woodland floor and then grow rapidly on reaching the light. Bluebells, along with wood anemones, need light so there is always a race to finish flowering before the canopy closes over. The white star-shaped flowers of the wood anemone (sometimes called Windflower) open up in sunlight and close when the sun isn’t shining.

Primroses are another token of spring. The name comes from ‘prima rosa’ – the first flower of the year. They were Disraeli’s favourite flower and on Primrose Day (19th April) a posy of primroses is placed on his grave. Most primroses have two types of flowers on separate plants. One kind is ‘pin-eyed’ which has a long visible stigma with the stamens hidden below in the tube. The other is ‘thrum-eyed’ which has long stamens visible with the stigma hidden below. This strategy prevents self-pollination.

Other woodland plants are ramsons (wild garlic) and dog’s mercury. Both create large swathes of plants but have slightly different soil requirements. Wild garlic, with its white flowers and distinctive aroma grows in moist woods on rich soils while dog’s mercury, with its separate male and female flowers, prefers well-drained soil.

The grassland on Earl’s Hill is renowned for its spring ephemerals. These are warmth-loving winter annuals which germinate in the autumn, pass the winter in the vegetative state, then flower, set seed and die in the following spring or early summer. Plants such as early hair-grass, small cudweed, changing forget-me-not and shepherd’s cress thrive on the eastern and southern slopes of the Hill.illHHill

In May and June botanical surveys will take place to assess the condition of certain areas of grassland on Earl’s Hill.

Birds: The months of April and May herald the return of summer migrants that nest on the reserve. Look and listen out for the small Pied Flycatcher down by the Habberley Brook. Also Redstarts, Willow Warblers, Blackcaps and the Chiff Chaff with its recognisable call.

Of course, spring is the time for lambing, so by mid-April we should see lambs gambolling around – cue to take extra care when walking your dogs!

Friends of Pontesford and Earl’s Hill.

As from January 2017 work parties will be on the 2nd Friday and 4th Saturday each month.  Come and join us for a bit of good fellowship and help to protect the Reserve for the future.

Help on the Hill

Over the last few months we have surveyed Pontesford Hill for plants, birds, mammals, moths and butterflies. Now it is time to turn our attention to Earthworms! On Saturday 9th April Dr. Charlie Bell from Preston Montfort Field Studies centre will lead a “blitz” looking for these annelids in various parts of the reserve to compare the species found in the conifer woodlands of Pontesford Hill with those down in the moist mixed woodland, the high acid grassland etc. Samples will be collected from leaf litter and from small trenches a spit deep. The worms found on Saturday will be placed in alcohol to kill and preserve them for examination at Preston Montfort the following day.

All are welcome to attend and lend a hand. If you are planning to attend this event please let David Morgan (e-mail davidmorgan.fr1@hotmail.co.uk ; mobile 07800 506157) know by Thursday 31st March at the latest. Meet at Pontesford Car Park at 10am Saturday 9th April. Those wishing to attend Preston Montfort FSC on Sunday 10th please make that clear when responding. There is normally a £5 charge per head  for using their equipment which on this occasion will be paid by the Friends of Pontesford Hill but we will need to do so in advance.

We plan to finish not later than 4pm on Saturday but those who can only stay for the morning will still be welcome. If coming to the reserve please bring suitable footwear (wellington boots recommended) and outdoor clothing. Bring a packed lunch if staying all day.  A hand lens might be useful to examine live specimens if anyone cares to bring one along. On Sunday those staying all day should again bring a packed lunch but tea/coffee will be available.

Don’t miss this once in a lifetime opportunity to see how many of the 27 UK species live in the soil of our hill!”

On the morning of the first ever Pontesford Hill work party I was greeted by a veil of rain as I opened the minibus door just before 10am. It had rained all night, and on the drive down from Shrewsbury,  the forecast was for more of the same.

Despite my pessimism and to my surprise I was joined, very soon, by a hardy band of smiling and determined volunteers most armed with their own selection of tools to supplement those I had brought. I was forced to send Mike Mortimer home as the sound of his coughing and wheezing belied his obvious enthusiasm. Still, five of us headed off up the Eastern bridleway determined to widen it for walkers and horse riders and open it up for vehicle access in order to extract firewood in the near future.

The rain proved less dramatic than forecast but the winds did get stronger as we worked. None of this dampened the enthusiasm of the group and we worked through to lunchtime clearing the whole length of the track with hand tools and a scrubcutter. Young trees, bramble and holly were cleared along with overhanging branches. Everyone went home with the warm glow of success for a job well done. A big thankyou from me to all those that helped.

A news item with images 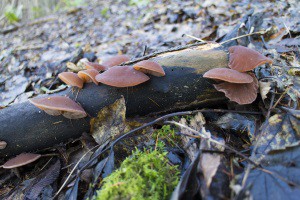 Autumn arrives on the hill

Walking on the track earlier this week I was delighted to see that many of the fallen branches which form such a rich habitat for the Hill’s animals are now sprouting fungus.

This is an example of….

This is a news story, something which was worthy of mentioning on the site.